In this blog, I discuss my recent sell-out success at Walker Stalker Con in London, and how I managed to create a legion of loyal fans in the space of a weekend.

It’s 10:00pm on a Tuesday evening, two weeks before the big event. My husband is standing in the kitchen with a bag of alginate in one hand and a mixer drill in the other. He’s staring at me expectantly with a glimmer of tiredness in his hazel eyes, and his wild, auburn hair has a light dusting of pink powder from the previous batch.

“Are you ready to go again?” He says, in a weary tone.

We’ve both been at our hectic day jobs since 6:00am, and now we have a long night ahead of us moulding zombie hands. We’re both exhausted and neither of us wants to be doing this. But we’re invested now. We’ve come too far and we’re quickly running out of time to build the stall. To lighten the mood in this dire situation, I say with an air of sarcasm,

“Who’s idea was it to make these damn zombie hands anyway?”

He smiles lazily, with a twinkle in his eyes, “You did…this is all you. Now grab the bucket and get ready with the water…”

My husband has a saying that perfectly describes our relationship: “If you can dream it, I can build it.” I am firmly the dreamer in this partnership. I’m the writer, part-time indie author and creative entrepreneur, whereas he’s the logical realist and the literal builder of dreams. He keeps me grounded and focussed, but every now and then, he indulges my whimsical ideas and rises to the challenge with his tool box in hand. This is one of those moments.

A year earlier I had heard about Walker Stalker Con on Facebook. It was originally created by fans of the cult TV series The Walking Dead, but over the years it has grown in popularity. Throughout the weekend you can meet the stars of the show, as well as other actors from equally popular TV shows. There’s also high profile televised panel discussions and stalls selling an array of merchandise. This also happened to coincide with my decision to publish the first book in my dystopian YA series Kill or Cure, after my overwhelming success as a Wattpad author.

When the opportunity arose to apply for a vendor pitch at Walker Stalker 2018, I took a punt without hesitating. At the time, I hadn’t even fully edited Kill or Cure yet, but I knew this was an opportunity that I didn’t want to miss. It was evident from the photos and articles online, this event attracted my key demographic, and I wanted to meet them in-person with my book in hand.

I had previously attended the MCM comic-con in the name of research, to see what other authors and artists were doing at events like this, and my discovery was surprisingly little. Most authors were standing gloomily behind a table covered in black cloth, with a stack of books in front of them. Rather unsurprisingly, the vast majority of people were walking past without showing a glimmer of interest. I knew from that moment that if I was going to sell my book successfully as an unknown indie author, I would need to think outside the box.

In my mind, a stall at a convention should be an extension of your book cover, similar to a shop window at a department store at Christmas. Naturally I turned to Pinterest for inspiration, and then swiftly met with one my best friends for coffee; a creative entrepreneur and wedding photographer, who loves nothing more than to brainstorm ambitious ideas for business. After a land-slide of caffeine and cakes, we had devised an interactive photo-wall of zombie hands to attract my potential customers. All we had to do now was to build it with little to no budget.

Within a matter of weeks we had sourced free pallets from Facebook Market place, and moulded our own hands into zombie claws with alginate and plaster. I had even trawled through eBay to purchase some cheap artificial plants, disused apple crates and hessian sand bags to create a ‘dystopian look.’ The end result exceeded all expectations. I knew deep down that I was potentially on to a winner, but I was still plagued by self-doubt. After all, I had never even attended Walker Stalker, let alone as an author.

My husband and I had a bet before we left for the event, on how many books I would sell during the weekend. I said a meagre 40, thinking that even with our epic dystopian-style stall, I had doubts that people would take a chance on an unknown indie author. My husband was more optimistic and said that I would sell 50.

By two o’clock on Sunday afternoon, we had completely sold-out and had somehow managed to sell 100 books (we had even sold my personal copy!) I feel confident that If we had more books with us, we could have easily sold another 50 before the convention closed. At various points throughout the weekend, we had a long queue of people waiting (sometimes at over 20 deep) to purchase my book, and they were all eager to meet the indie author behind it.

On reflection, I’d say the interactive photo wall acted as the ‘hook’ which resulted in crowds of people stopping to watch and take photos, and my ‘elevator pitch’ sealed the deal. Before we embarked on this adventure, I completely underestimated how many people would be interested in learning my story as an indie author, and how high levels of enthusiastic engagement and my passion for Kill or Cure could translate into so many sales.

This carefully crafted combination created a buzzing atmosphere, and we struggled to keep up with demand. So not only did we manage to sell every book in our possession, but I also met a new legion of loyal fans who managed to binge the book within a day or two, many of whom have been messaging me non-stop ever since. The reviews and feedback of Kill or Curehave been wonderful, and it has opened up an array of future opportunities.

It goes without saying that I’ll be attending Walker Stalker next year, hopefully with the second book in the Kill or Cure series too. It was without doubt the most exhausting yet exhilarating experience I’ve had as an indie author, but the long hours and hard work were completely worth it. I’d highly recommend any genre-specific author attending a convention like this, there’s so many to choose from, but be prepared to get creative. Much to my husband’s dismay, I’ve already started to brainstorm even more ambitious ways to sell my books in 2019… so watch this space. 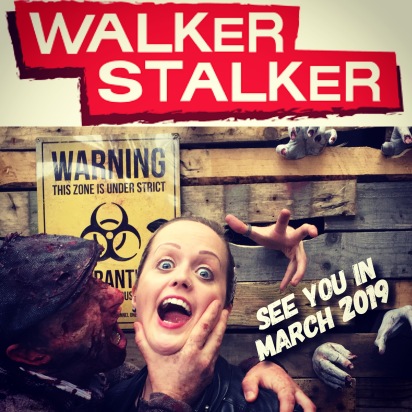 ← The Wattpad Revolution
Can Angela Kang pull it out of the bag for season 10 of The Walking Dead? →